ROVAL has been certified to have equivalent anti-corrosion performance as hot-dip galvanizing by the Council for Construction Technology Review and Certification in Japan.

Anti-corrosion performance of ROVAL is equivalent to the highest grade of hot-dip galvanizing available in Japan.

ISO12944 is an international standard for the protection of steel against corrosion by protective paints systems. ROVAL 80μm conforms to to the technical requirements specified in ISO12944 C5-High.
This means that ROVAL can be expected to have a useful life of 15 to 25 years in C5 corrosive environment.
>> Go to Certificate Download

We conducted an exposure test on Miyakojima Island, where the corrosivity category is the C5 environment. Rust occurred on the entire surface of general paint in 3 years, but ROVAL did not show rust even after 15 years. This is the data that proves compliance with ISO12944 C5-High.

To compare the anti-corrosion effect, we conducted exposure tests on Miyakojima Island.
Miyakojima Island is located in the southern area of Japan, at roughly the same latitude as Florida, U.S.A. The island is surrounded by a lot of deterioration factors such as high temperature, high humidity, strong sunshine, and a salt-rich atmosphere.

In such a harsh environment, test pieces of JIS anti-corrosion paint + phthalic topcoat generate rust in one year, and in three years, the rust spreads over the entire surface.
Using Epoxy paint top-coated with a urethane, rust showed up around the cross-cut area.
On the other hand, ROVAL no rusting occurred even after 3 years.

These results and pictures prove that ROVAL protects steel surfaces from rust creepage with its electrochemical reaction, whereas other paints allowed the rust to spread from the cross-cut areas.

[ Objective ]
Verify the anti-corrosion performance of ROVAL and Hot-dip galvanizing by an atmospheric exposure. 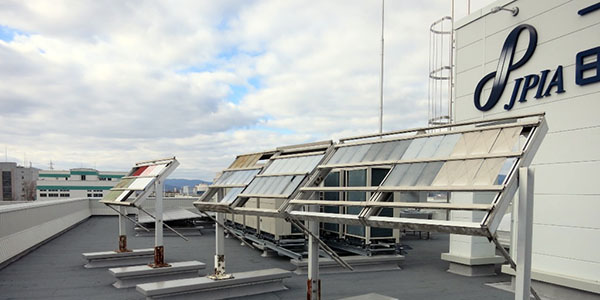 [ Result ]
Evaluation after 20 year atmospheric exposure.
ROVAL (Film thickness: 80µm)
— Color change of the film was seen but stayed without rust for 20 years.
Hot-dip galvanizing (HDZ55: 550g/m2)
— Rust occurred on gray zone, which is probably due to corrosion of ferrous of zinc-ferrous alloy layer. However, the rust was only on its surface and not heavy.

Let me explain the difference in anti-corrosion mechanisms between ROVAL and conventional paints. Conventional paints protect steel by shielding it from water and air, but ROVAL’s protection is based on an electrochemical reaction.

A conventional paint film acts as a surface barrier to water and air. This is called “anti-corrosion by barrier protection”. But once the film is damaged or has deteriorated, rust develops in that area and begins to spread underneath the film.

ROVAL protects steel by the mechanism of electrochemical reaction, employing the self-sacrificing property of zinc. Simply put, keeping the iron and zinc in close contact, only the zinc side will rust and not the iron. Although water and air penetrate through the zinc particles to the steel surface, the electrochemical reaction of zinc prevents further development of rust.
Even when a ROVAL film is damaged, rust will not spread due to the presence of the surrounding zinc particles.